A Little Backround on the Pascua Lama Project 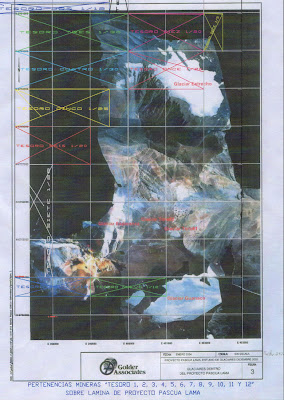 After many weeks of Pascua Lama news the ongoing delays and the complicated tax issues in Chile and Argentina another story has begun to emerge from the depths of Mina Pascua. A Chilean miner living in Vancouver Canada known as Jorge Lopehandia has been filing documents to the authorizes in Chile and Canada saying that he is 100% owner of Mina Pascua.

Up until now the name of another miner Rodolfo Villar who went to the Supreme court to say he was hoodwinked by the company Barrick Gold has gotten all news coverage. The sale of his titles for 10,000 pesos or $20 US and the court case at the 14th Civil Court in Santiago which rendered the contract NULL and VOID. Barrick responded to this court decision saying it was a nucicence suit.
According to Vince Borg Senor Vice President , Corporate Communications, the lawsuit will not affect the development of Pascua-Lama.“We do not believe that the project's development will not be impacted. The claims ( Rodolfo Villar) in question do not affect the area of mineralization. They also will not affect the development of the project infrastructure,” he said.

He said he was unsure of how much exploration potential there is on these claims, but “I suspect not high.”


However the little know fact is that Rodolfo Villar is an employee of Jorge Lopehandia and that Rodolfo went to sell the land title to Barrick Gold behind Jorge's back.

He was sued by Barrick Gold in Canada for libel in lawsuit the first of its kind in Canada . In order to silence and discredit him from accusations he was trying to publish online in this complicated story of Now after years in the background and himself being sued by the company for the first Internet backstabbing and raw deals.

Here is an excerpt told by Jorge to me about the deal between Rodolfo Villar when trying to sell titles as he needed money to maintain claims near Mina Pascua.

"Rodolfo Villar told a lawyer Alejandro Moreno Prohens that he could not find me and needed $ to maintain claims near Pascua I sold to Barrick... MORENO told Villar NO WAY let me help I have cash... Villar gave the info to MORENO and MORENO re-claimed Villar's new discovery to MORENO'S NAME, and with this he went to Barrick to get 280 million and IN THE SAME (MORENO) CONTRACT get Villar 10,000 poesos for 8600 hectares

MORENO taught Barrick how to claim jump me after he claim jumped VILLAR
It is all in the anals of mining Registrar in Chile"...


When asked if Jorge is a claim jumper this case he responded. " No I am not a claim jumper, Barrick lost the area to its fraud to Chile and Mining Code when I claimed 1996. My areas are 100 % Mina Pascua and Vince Borg's Declaration make him liable to me and to his shareholders/banks and Chile itself.

He went on to explain more of the sorted detail
"We did not claim jump, Barrick lost the area to fraud to Chilean Mining Code and I proved this to John Lill in 1996, it was after Barrick discovered I was right that they JUMPED my AMARILLOS - correct at law discovery.... if their claims were right and I jumped their good claims... why TESOROS of Unda Lannos I seized judicially... why the rest of subsequent guanaco and burro pastures for Barrick thereat?"In Chile there is a law against IMAGINARY CONTRACTS & TRANSACTIONS penalized with 5years 1 day per . barrick did many $10,000 pesos contracts near Pascua (self admitted in Trial in our case)"The difference between today and last year when i sent out all this information to anyone who would listen is that I am now 100% owner of MinaPascua and I have all the documentation to prove it", says Jorge Lopehandia.

All I know is that on paper Jorge Lopehandia is the current title holder of Mina Pascua , how he got there is another story. This is a fight amongst miners ,who is the original owner and who holds the title today and who committed fraud," says Daniel Yanez freelance reporter for El Siglo who has written many articles on the Pascua Lama case and has follow Jorge Lopendia's story.

Whether or not this case gets any attention in the Chilean or Canadian media this ongoing saga of who is the rightful owner of Mina Pascua will continue. Only time will tell if the company can whether this latest storm as they have tried to maintain that everything is under control with respect to the advancements and on going delays with Project Mina Pascua (Lama).
Source - http://pascualamaproject.blogspot.ca/2008/09/who-is-100-owner-of-mina-pascua.html
Posted by ChristopherB at 10:52