BEYOND BANKSTERS - The Joyce Nelson Tour

More from the desk of Alan Blanes,

I am greatly looking forward to reading BEYOND BANKSTERS. It is remarkably good that Council of Canadians chapters are getting enthusiastically engaged in the Beyond Banksters Tour.

A very significant aspect of the lawlessness that has arisen from the non-regulated SRO culture [self regulated organization], is its providing an impunity system for fraud and related violations of Sections 361-363 and 380 of the Criminal Code of Canada, that in a sane world, would be governing the sales of securities - stopping their sales under false pretenses.
I have spent a decade looking at the structural barriers to having the criminal code recognized and enforced in Canada on investment sales. There is a demonstrable unwillingness on the part of the mediative resources such as OBSI, Ombudsman on Banking Services and Investment, to assert any acknowledgement of the foundations of good faith.  OBSI will not acknowledge evidence of  dishonest dealing - but is only interested, in the case I have witnessed, is in getting the swindled client to sell the fraudulently dumped product. OBSI has shown that it is not willing to look at the extortion-type gag orders that the investment broker is willing to impose on the victim, in exchange for returning their funds. It claims that it is only looking at the matter of whether losses have been experienced by the client - but appears to not understand that sticking a client in a hidden 7 year lock in and putting a client's savings at risk - when the client has contracted for guaranteed savings - is against the law, and the law will only be enforced if those who see the evidence of violations are willing to document the malfeasance and take a stand against it with law enforcement. The whole regulatory culture in BC has a policy instead of parroting: "We are not allowed to look at the Criminal Code".
In the past decade, I have saved hundreds of e-mail items of correspondence with the organization that are supposed to be guarding good faith practices in the marketing of securities; I have seen and saved countless replies that show clearly that the practices of deceptive dealing are now being protected by the very organizations that are supposed to be protecting the public. I have never found any interest in making sure that the Rule 2500 of the Investment Industry Regulatory Organization of Canada - that requires confirmation of new accounts by having another staff person within an investment brokerage, check with the client to ensure that the client is actually placed in the securities that they have chosen to contract for. This missing factor is responsible for many elderly people being subjected to enormous legal expenses, and years of unnecessary torment.
CBC GO PUBLIC has uncovered a lot of facts that the Canadian public has up until now, not been made aware of. My dad's case is central to some of the coverage cited here:
The article:
http://www.cbc.ca/news/ business/financial-industry- employees-forge-documents- more-often-than-you-d-
think-1.4138212
The World Report radio clip:
http://www.cbc.ca/listen/ shows/cbc-news-world-report/ segment/159143
The Green Party of BC is holding its AGM in Sidney on August 18 and 19. I am volunteering at that conference, and I am interested in finding anyone who shares my concern for getting rule of law restored in securities and investment in Canada. BC has been among the most lawless jurisdictions over the past several years. If the Green Party and the NDP could begin a dialogue on this topic - and create a tag team approach to getting the public on side, by reinforcing each other with coherent proposals for building an honest investment oversight system, this problem will be contained.
Cordially
Alan Blanes
Ph 250-300-8400
See below for info on Joyce Nelson and her new book,
Beyond Banksters: Resisting the New Feudalism
https://www.youtube.com/watch? v=Qm6JihBCnhc
https://watershedsentinel.ca/b eyond-banksters/
http://theindependent.ca/2017/ 01/06/book-review-beyond-banks ters-by-joyce-nelson/
http://commonsensecanadian.ca/ book-review-beyond-banksters-r esisting-new-feudalism/
http://www.joycenelson.ca
Posted by ChristopherB at 20:31 No comments:


Further on the case of Poonian v. the BCSC, BCSC is ordered to pay legal costs in BC Court of Appeals case it recently lost. This is the same case where the BCSC withheld hundreds of pieces of evidence so it could 'make' its case against Mr. Poonian. We have previously reported on this here among other posts. Breaking News in the Case of Poonian v. BC Securities Commission

The BC Securities Commission will not Appeal the ruling by the BC Court of Appeals to Canadian Supreme Court. Mr. Poonian will no longer have to pay any fines or disgorgement fees to the BCSC as a result of this ruling along with BCSC covering his legal costs. See court documents below, to obtain a copy of this ruling one can email bk1092003@yahoo.ca and request documents pertaining to this case should they not be made available online by the various government agencies involved. 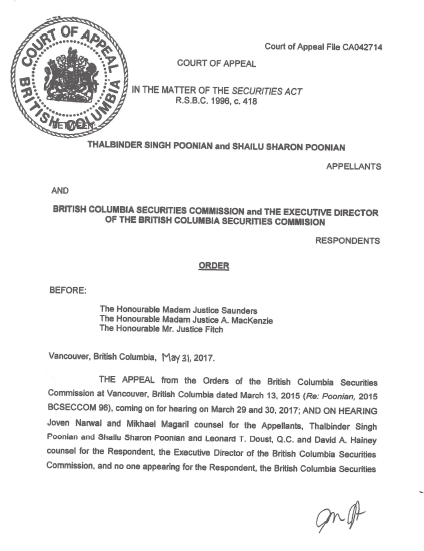 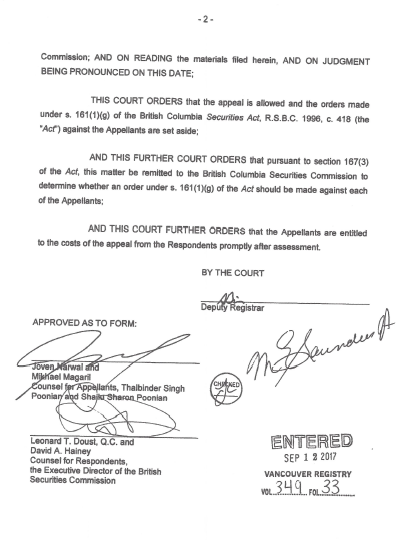 Posted by ChristopherB at 10:14 No comments: