STATEMENT OF FACT
The Surveillance Files


This is the receipt from our stay at the Holiday Inn Express on Broadway in Vancouver where our Hotel room was broken into.

(receipt held back for privacy reasons, this file was for the police but they don't seem interested)


We had been out for about six or seven hours at the most that day. I was with my Mom and girlfriend Angelina and my daughter who has since passed away. We returned to our room to find the Manager on duty and another shorter smaller man leaving our room. They both started and acted like they had just been caught before the 'Manager' stammered the excuse that the front desk had not talked to us in 24hrs although we had only been gone six or seven. Our stay since check in would not even have been 24 hrs as we checked in late the first night and this was our first day there. The shorter man had dark short buzzed hair and hid behind the “manager” the entire time. Later that night when I booted up my laptop I discovered my computer had a false version of windows on it. My computer was fine the day before and I assure you the windows copy was genuine. There was a camera directly above our hotel room door. We would like to subpoena the tapes. Thank you for looking into this matter.


This is just one of many odd incidents.


The two men in the pictures taken at a bar had seemingly followed me that day. I found one of the white cargo vans behind the office I took pictures of, I did not get plate pics because as I was taking pics of the office and before I got to take pics of the van these two showed up in the distance down the ally way. I had been waiting for the bus around 8pm that night when I seen them with orange vests on pretending to work near city hall where the bus stop was. On the far other side down Ellis St I could see one of the white Mercedes vans. It had been all around me all week.


They would park down street or at Ben Lee when I lived on Leathead Rd. I decided instead of catching the bus I would go for a walk and see if I was followed. After a bit I came upon a white cargo van behind the office I took pics of. I do not think the office is related it's just reference for the story and unfortunately at the time I thought it might be something but it just distracted me from getting the plates before these two guys show up down the ally way. When they showed up I left quick and booted round the corner into a place that used to be the old Christophers Seafood and Steak. I thought I would wait and see if I could see them again or confirm their actions. In a few minutes they were walking by looking at their phones and up down the street. They stopped hesitated then the one looking at the phone pointed in here where they settled far kitty corner from me. When I went to the washroom one of them followed me and came to the washroom. When I got back to bar I took the pics you see. After I got those pics I waved at them the first chance I had for them to see me waving. They both spooked looked down played with their phones and got out of there within
minutes. 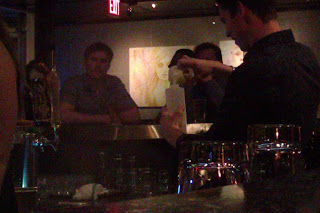 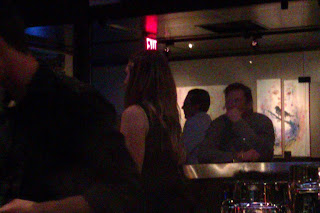 The pics I have included of the white Dodge surveillance van that I found two blocks from my house. It had eye-holes cut out of cardboard and was in a position to watch me go to bank, store, friends and parents all from that spot. There was double pane dark grey glass between the drivers cab and the rear. 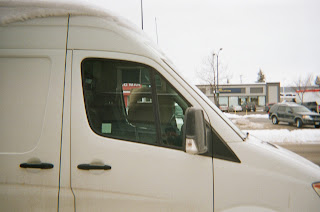 As I took the photo of the front a man came quickly out a couple doors down. He paid no attention to me so I didnt think anything of it. He wore navy blue pants black boots/shoes and blue black jacket and had a dark beard that had started greying. I took last pic of the front and turned and put the camera in my pocket. Something told me look back, I should not have put the camera away. He was standing out the driver side door hand on the wheel staring at me. He immediately ducked in and drove off. Few mins later I took pics of him at the Hollywood and 33 Intersection. 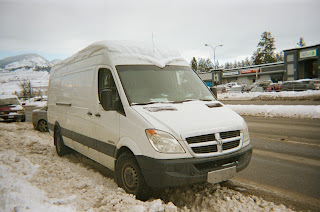 I have a lot of pics more to come. I know many of them are nothing at all and I'm probably overly paranoid but some are to coincidental.


Others are not coincidental, I was forced to do a bit of counter surveillance myself in order to get a few pictures of various operatives in their employ.